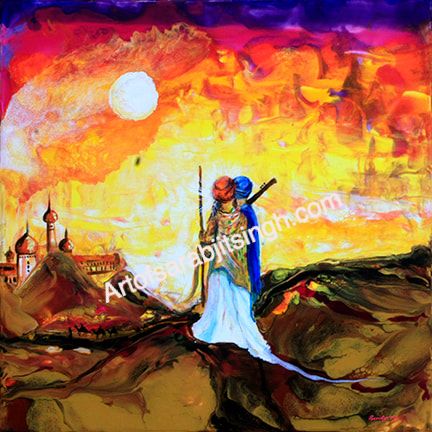 Guru Nanak Dev- Udasis (Travels)
Guru Nanak traveled the world to spread the message of harmony among people of all faiths, through sustained dialogue among religions and religious communities. He promoted the culture of dialogue among various religious groups, whether it was the yogis of the Himalayas or the maulvis of the Mecca. He brought awareness to meaningless rituals that people followed blindly.It is said that he undertook five journeys (udasis) in his lifetime.On his first journey, Guru Nanak covered most parts of present day India and Pakistan and is believed to have taken place between 1500 and 1507 AD. Guru ji visited most parts of present day Sri Lanka on his second journey, that lasted for about seven years.His third journey, took him through the difficult terrains of the Himalayas to places like Kashmir, Nepal, Tashkand, Tibet and Sikkim and took place between 1514 and 1519 AD. His fourth trip or Udasi covered Mecca and most parts of Middle East and lasted for about three years. His fifth and final journey, lasted two years and Guru ji focused on spreading the message within the region of Punjab. He was accompanied by Bhai Mardana (A muslim) in most of his journeys.
This series was part of  the Exhibitions in Nov. 2019 at Kala Sangam gallery Bradford,UK. , Faiz Art Festival, Lahore & Sikhlens, LA. It was shown at the opening of the  first Contemporary Sikh Art Exhibition at Triton Museum of Santa Clara CA.